I handcraft chocolate from bean to bar in ridiculously small batches, using a hands-on, labor-intensive process with the sole goal of producing great chocolate. My process has evolved and changed—sometimes radically—over the years, as I’ve continued to learn more about chocolate and chocolate making through experience, experimentation, and study.

Additionally, I have custom-built the majority of the equipment and machinery I use to make chocolate. This includes simple machines like a vibrating table or cooling cabinet, to more complex machinery including a roaster and chocolate conche. Some of this is MacGuyvered hackery—re-purposing and modifying existing equipment—and some is designed and fabricated from scratch.

The result of all of this is a chocolate making process that is truly unique to Potomac Chocolate.

After receiving fermented and dried cacao (cocoa beans), the first step is to sort it. This entails sifting through all of the cacao and removing any non-cacao material (sticks, leaves, rocks, etc.), broken or cut beans, flat beans, and bean clusters (several beans that became stuck together during the drying process). The goal is to end up with only the best cacao. 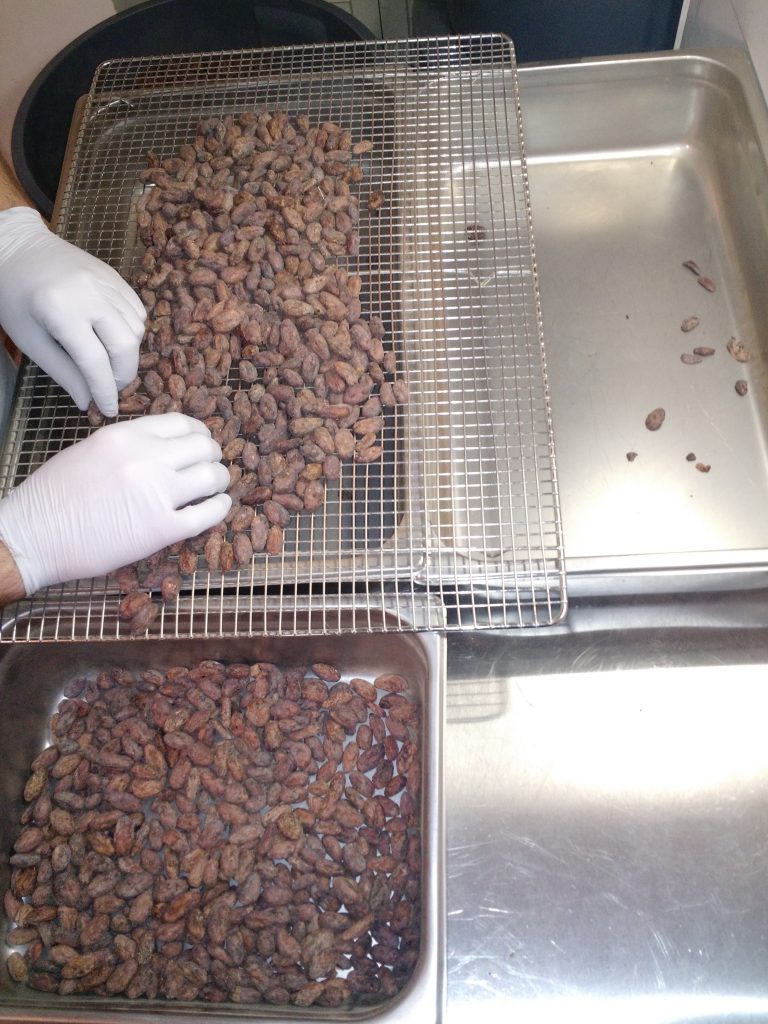 After sorting, I then roast the cacao in my homemade cacao drum roaster. The roaster is a small convection oven with a drum hacked in, with an externally mounted high-torque drill with pulley system to rotate the drum. As the drum rotates, the cacao is constantly tumbled, providing a consistent roast. Roasting is my first, and best, opportunity to dramatically influence the flavor of my chocolate. (Side note: I’m slowly working on building a new roaster that will be able to roast a lot more cacao, with even better control.) 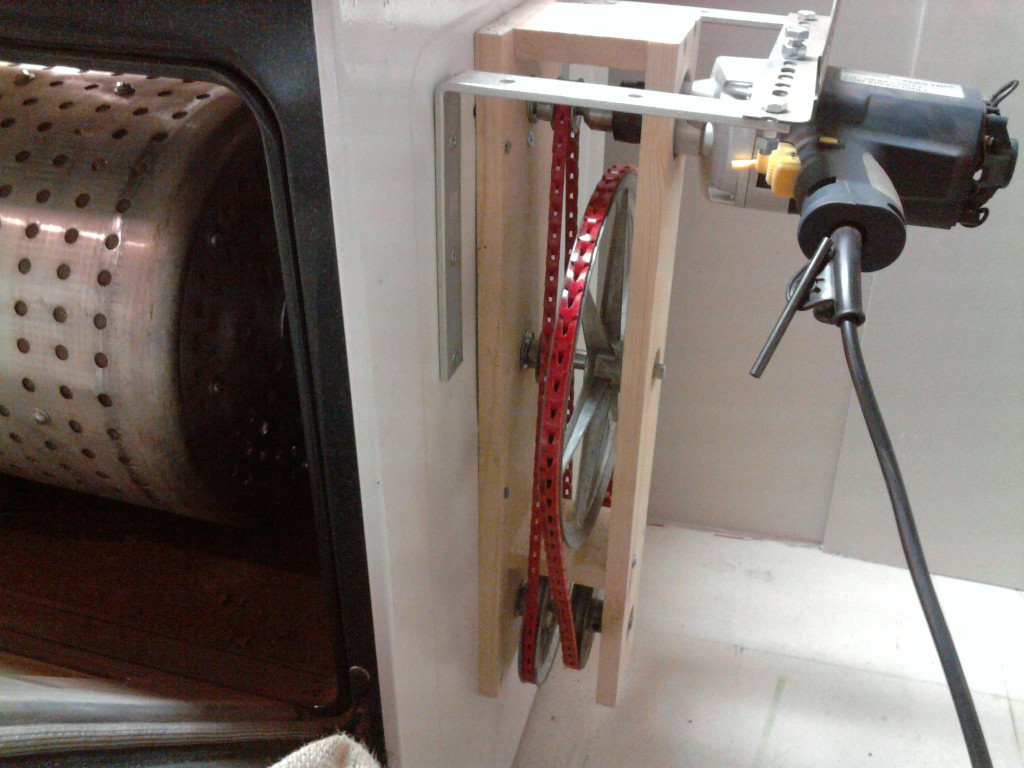 A lot is going on during roasting. Flavor development is one of the most important things happening. Each origin of cacao requires a specific roast to bring out it’s best flavors. When starting to work with a new origin, I do many test roasts and test batches to develop the perfect roast profile for that bean.

In addition to flavor development, other important processes are also occurring during roasting. Among these are driving off acetic acid—a byproduct of the fermentation process—and further reducing the moisture in the bean.

After roasting the beans are cooled to stop the roast and bring the bean temperature to the point where they can be cracked and winnowed. This process is accomplished by another homemade machine: the winnower. This machine uses a juicer to crack the beans, separating the outer shell or husk from the nib. The nib is the ‘meat’ of the bean and is the part which is what will be refined to become chocolate. The cracked beans then fall into a series of tubes that suck the light husks away and let the heavier nib fall into a bucket.

The next step is to grind the nibs. For this, I use a wet grinder, often referred to as a melangeur. The wet grinder is a granite-based bowl with two large granite wheels. As the bowl turns the nibs are crushed under the wheels. The cacao nib is anywhere from 45-60% cocoa butter, so as they’re crushed and ground the solid nibs turn into a liquid called chocolate liquor. At the appropriate time, I add sugar to the chocolate liquor. The chocolate then continues to refine in the wet grinder until all of the solid cacao and sugar particles are refines below the size that the tongue can detect.

Once the chocolate has been refined to the correct texture, it is then moved to the conche. Conching is a process where the chocolate is agitated, aerated, subjected to shear stress, and heated. These actions do several things to the chocolate. The agitation, aeration and heating all help to drive off moisture and off-flavors (good flavors, too, if you’re not careful!). The shearing action helps to coat all the solid particles in cocoa butter and helps to lower the viscosity of the chocolate.

Side note: For a lot of chocolate makers, including myself until the summer of 2015, the wet grinder is used both for grinding/refining and for conching (discussed further in the next step). But, a grinder or melangeur is not a conche—it’s not even a particularly good refiner, in fact 🙂 —and so to compensate, it is generally run for anywhere from two to five (or more) days to accomplish some of the things that a conche accomplishes.

After conching, I then age the chocolate in large blocks. After the chocolate has been refined and conched, the flavors are generally somewhat muted and muddy. After a period of aging, the flavors become much more pronounced and distinct.

Once the chocolate has been aged, it is melted and tempered. Tempering chocolate gives it a nice snap and shine, and lets it melt a little below body temperature. To explain the tempering process it’s important to understand a couple things. First, chocolate is a suspension of cacao and sugar particles in crystallized cocoa butter. Second, cocoa butter can crystallize in six different types (type 5 is the one you want). So, the tempering process controls how the cocoa butter crystallizes—it’s essentially a way to jumpstart the formation of those type 5 crystals. There are many ways to temper chocolate, and which one to use is dependent on several factors. The way I do it is by bringing the chocolate significantly above the melting point of all of the crystals to ensure there is no crystallized cocoa butter. Then, I cool the chocolate down to where type 4 and type 5 crystals form. Once it reaches that temperature, I reheat it above the type 4 melting point leaving only type 5 crystals. If done correctly, the chocolate is now in temper. If done incorrectly, the chocolate could remain un-tempered or over-tempered—both of which mean that the process needs to be restarted.

Once the chocolate is in temper, it can be molded. The tempering machine I use has a small depositing pump that I use to fill my bar molds. After the molds are filled, they’re placed on a vibrating table to smooth out the chocolate and release any air bubbles. Then they’re placed in a cooling cabinet to set. Once they’ve set completely, they’re ready to be de-molded and wrapped.